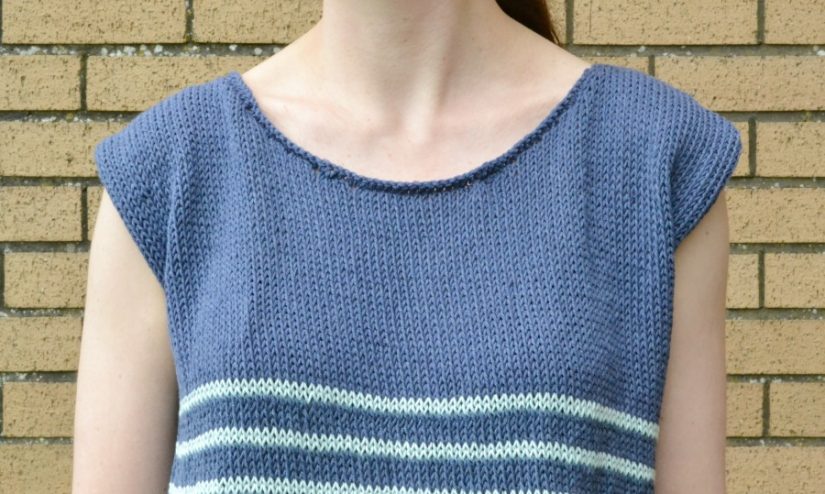 The Tops, Tanks and Tees Knit Along couldn’t have come at a better time for me.  I had progressed from merely thinking about making something wearable to actually collecting materials and looking at patterns when the announcement went up on Very Shannon.  My mum had a bag of cotton yarn in her knitting cupboard (she has at least one of everything in there) in the colours I was thinking about using, so that took care of one major step.  The longest part for me was deciding on a pattern.  There’s just so many good ones out there and not enough time to make them all.

Notes – I had the hardest time getting gauge on this top.  When I knit the first swatch, it was longer than it should have been but also narrower, which seems like an impossibility.  No amount of Googling could give me an answer on how to fix the problem so I ended up going up a chest size and a needle size – the length issue wasn’t really an issue since I would have added extra stripes anyway.

I loved working with the cotton yarn, even if it was difficult to keep all the wee strands together at some points.  The darker blue yarn ran out just after I finished the stripe section, which I was expecting.  I’d thought I could go to the nearest town with a yarn shop and get something to match but that was wildly optimistic of me, so I ordered more of the same and hoped the dye lots weren’t too different.  I couldn’t even tell them apart when I finished so yay for Drops!

Size wise, and despite all my careful calculations, the top turned out a bit bigger than I was aiming for.  Not really a problem, since I like my tops oversized anyway.  I knew from the start that I wouldn’t be adding sleeves and I’d expected to knit around the armholes to finish them off, but they curled in nicely and made it unnecessary to add any more detailing.  A quick join of the shoulder seams and a pick-up-stitches-then-cast-them-off round on the neckline and it was done!

I wanted to get some nicer pictures in the sunshine but the weather hasn’t been very obliging this week.  I think we were spoiled a bit in the last few weeks, although it was more summer than we got last year so I shouldn’t really complain.  Hopefully I’ll be back at the beach before too long.

Did anyone else join in with the Knit Along?  I’ve been excitedly searching the hashtags on Instagram each day to see what others have been creating.  There’s so many pretty knits out there!

Follow me
Elise
A Scottish lifestyle blog based in Glasgow. Hang around for talk on crafting, style and adventures 🙂