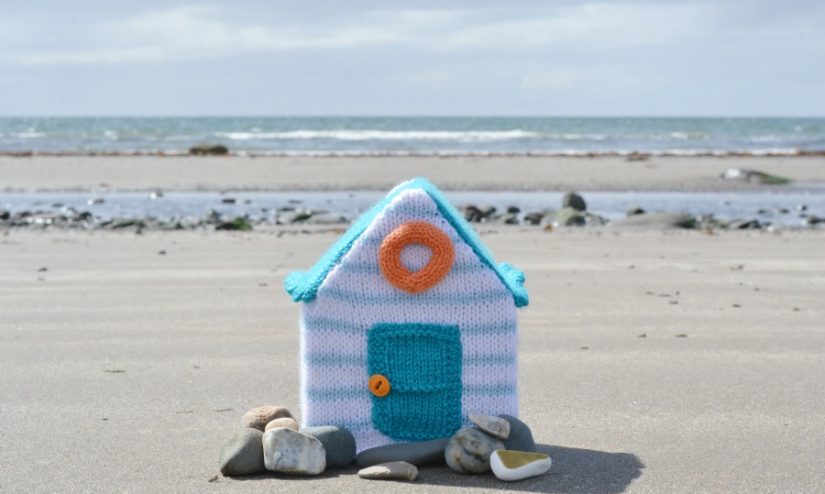 This knitted design was one of those things that you see and immediately want to cast on.  I mean, who doesn’t want their very own woolly beach hut?  I think I stumbled across the pattern on Twitter and immediately clicked over to Ravelry to download it.  Then, as fate would have it, I ran out of yarn for my Léger tee and fancied some instant gratification knitting while I was waiting for the extra yarn to show up (which it did, as I was writing this post this morning!).

Additions – A random stash button used for the door handle, cereal box cardboard cut into a hut shape and fabric scraps/stuffing for the inside.

Notes – The only major change I made was to knit the hut in 4ply yarn instead of double knitting, simply because I wanted a smaller version than the original design.  It still turned out to be a reasonable size though – next time I might half the stitches and see what happens.  Oh, and I also knit the base as a garter stitch square instead of the diagonally shaped square the pattern is written as, since I was reading it off my phone and didn’t want to consult it at every line.

The end construction was the most fiddly part.  Tam made me a cardboard beach hut to line the walls, roof and base but, because of the size of the cereal box (a giant Cornflakes one), it was cut in two parts.  After I’d stitched all the bits together, there was a certain amount of faffing involved in getting everything to stay in place while I stuffed the beach hut and stitched up its base.  I recommend sewing two sides of the base into place before attempting to straighten out the cardboard, otherwise it’ll move around a bit too much.

I couldn’t resist a mini photo shoot on the beach now that I live so close.  More teamwork was involved at this point – Mother did a great job of making sure my precious knitting didn’t blow away while I was positioning the pebbles.  They weren’t just for decoration, you know!

Has anyone knit anything fun lately?  Linking up to Ginny’s Yarn Along, of course (you can see what else I’m making this week on Instagram)

Follow me
Elise
A Scottish lifestyle blog based in Glasgow. Hang around for talk on crafting, style and adventures 🙂